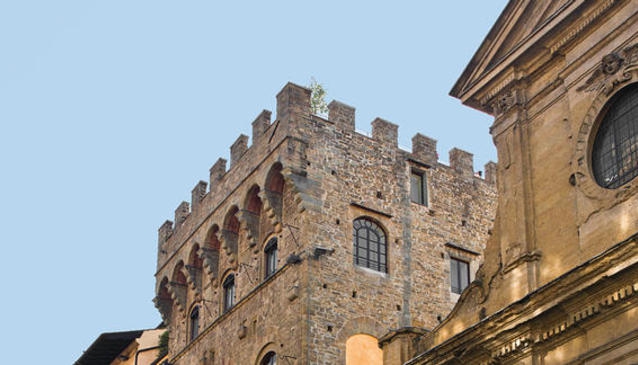 The historic building which belonged to the Gianfigliazzi family until the end of the 18th century hosted numerous important historical figures. At the beginning of the 20th century the palace was transformed into *Piccioli Guesthouse* quickly becoming a favourite residence of the English aristocrats and literati that loved the atmosphere of Florence birthplace of the Renaissance and the Sweet New Style with its churches works of art and unique cultural climate. After the Great War the Piccioli Guesthouse was closed but reopened in 2001 under the name *Antica Torre* which was later to become the *Palazzo Gianfigliazzi* in 2008. Thanks to careful restoration work which preserved and brought back to life all of the buildings original appeal the Via Tornabuoni palace acquired life and warmth once again. The magnificent complex is considered one of the historic *tower houses* of Medieval Florence and it preserves to this day the original architectural characteristics. It is an admirable example of how man is capable of taking buildings which were once devised for the purposes of war into oasi of peace culture and hospitality.

All of our providers offer 24/7 support

Create & Share your own Guide to Florence with friends and family!

Add your recommended places to visit by browsing the website and pressing the icon.

We Are Part of the My Guide Network!