Search for a company in Florence
Advertisment 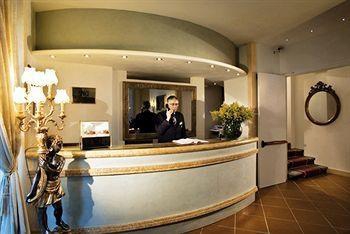 The location of this Florence hotel could not be any better for travelers. The Atlantic Palace Florence is in the commercial and historic center, near sites such as the Uffizi Gallery, Palazzo Vecchio, Cappelle Medicee, Duomo, and the San Lorenzo Market. The hotel boasts a buffet room overlooking the garden, gym, Internet access, business services, and a multilingual staff. The Atlantic Palace Hotel is only 10 minutes from the train station, and the Florence airport about three miles away.

The 58 guestrooms have a perfect representation of Florentine style to include exposed beams, terracotta pavements, authentic frescoes, and modern conveniences. Rooms in the Atlantic Palace Hotel Florence are spacious, featuring updated furnishings and amenities in 2001 to include satellite television, air conditioning, private bathroom, mini-bar, and charming balconies.

The Atlantic Palace Hotel Florence dates back to the 13th century when it was lived in by Teutonic Knights and then during the Renaissance, used as a nunnery. The hotel offers a Florentine atmosphere with magnificent inside architecture to include stone arches, stone columns, and pointed vaults.

Create & Share your Guide to Florence with friends and family!

Add your recommended places to visit by browsing the website and pressing the icon.

We Are Part of the My Guide Network!