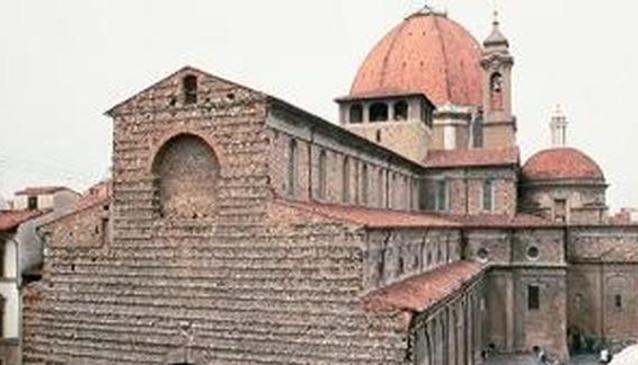 In 1419, at the Medici's expense, the new construction began according to the incomplete plans begun by Filippo Brunelleschi.

The church rises above a low flight of steps and has a weird façade made of bricks and stones left rough because the Florentines couldn't agree on a design for the stunning marble façade they'd wanted.

The vast and harmonius interior, dominated by the white limestone and the grey 'pietra serena', is divided into three aisles.

On the inner façade, designed by Michelangelo, is a long balcony designed for the exposition to the faithful of the relics of the saints conserved in the church.

Among the many works of exceptional interest housed in the church, particularly outstanding are the two bronze pulpits, raised on marble columns, made up of elegantly and meticolously sculpted panels by Donatello and his assistants.

In the north aisle is a huge fresco by Bronzino, packed with giant figures and portraying the Martytdom of St. Lawrence.

At the end oof the south aisle, before the transept, is the splendid marble tabernacle sculpted by Desiderio da Settignano, an exquisite masterpiece dating to the early Renaissance period. All the Medici family members are buried here.

Tell us what you're looking for...

We are now in 100+ Destinations and Growing. If you are interested in becoming a local travel partner and would like to find out more then click for more info about our Website Business Opportunity.