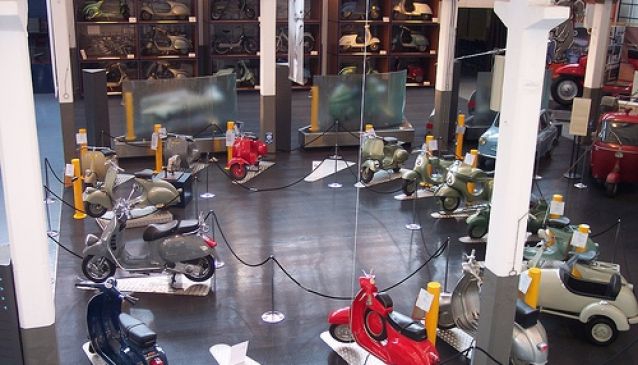 Directions to The Piaggio Museum

Inaugurated in 2000, the Piaggio Museum occupies the space that used to be the company toolshop in one of the oldest buildings in Pontedera. The Museum has been designed by architect Andrea Bruno with the aim of preserving the historic memory of the company.

It tells the history of Piaggio showing the work of designers like Giovanni Casiraghi, Luigi Pegna and Corradino D'Ascanio and the work of generations of men and women who worked for this company marking the growth of this territory.

The halls display Vespa and Gilera collections alongside the most significant of Piaggio's numerous products and rare pieces such as the prestigious Vespa Dalì, but also the mopeds such as the Ciao and Sì, that marked an epoch, and the multi-functional Ape, the truck that artisans and retailers over the generations have used for their work.

Tell us what you're looking for...

We are now in 100+ Destinations and Growing. If you are interested in becoming a local travel partner and would like to find out more then click for more info about our Website Business Opportunity.